The Church of God in Victoria held 3315th Worldwide Cleanup Campaign on 6th November. The You Yangs Regional Park is home to many Australian animals such as koalas and kangaroos, however over time some hard rubbish had accumulated on the sides of the roads, which were thus in desperate need of a clean-up. Catriona Rowntree, an Australian TV presenter from Channel Nine Getaway program, who is a local resident of the area, approached the Church of God after they won the Keep Victoria Beautiful Award for Litter Prevention.

She said, “When I asked for help from the church of God if they could help me clean up rubbish in my local area, I had no idea that this mountain of rubbish would be found. I’m so grateful that we have these volunteers who are so kind to help me and others to clean our environment and make our environment a better place to be. And of course, I’m so grateful to You our Heavenly Mother for inspiring these incredible people to give to others, and to care, and be passionate, and so kind.”

The Church of God teamed up with Catriona Rowntree to combat the problem by bringing around 100 hardworking volunteers.  News of the cleaning campaign spread throughout the small Victorian town of Little River, and over 30 local residents from You Yangs Protection Group, and Koala Clancy, and even Catriona’s husband, children, and mother in law, came to support the action. This became the largest cleaning campaign ever to take place at the You Yangs Regional Park. All the residents were in awe with the result – such a huge amount of rubbish was collected. For two hours, the volunteers, in teams, cleaned alongside Sandy Creek Road, Forest Road North and around the You Yangs National Park. During the cleanup 797kg of rubbish was collected including 80 garbage bags full of waste, plus 15 tyres, gates, wire fences, 3 chairs, 1 mattress, a couch cushion, a motor engine, some car parts, and a computer.

Mareta, a 15 year old volunteer from the Church of God said, “I like coming to the cleaning movement because I like to spend time with brothers and sisters, and make Australia clean. When I do the cleaning, I think of Father and Mother’s sacrifice and I want to make them proud.”

Sally Nicholas, secretary of the You Yangs Regional Park Protection Group, who joined the cleanup, commented, “I was so proud to be part of this wonderful group; these people are amazing. We can’t believe the amount of rubbish that was found at the You Yangs Regional Park. World Mission Society Church of God freely donated their time, and the enthusiasm they brought with them was outstanding. This all started from a desire to remove one mattress that was dumped on the side of the road. We are such a small group– we couldn’t have done this ourselves, and you have made such a difference.”

James Pettit, Catriona Rowntree’s husband, joined the cleanup and said “I live not too far from here– I’m a local farmer. We have noticed there is increasing use of the You Yangs Regional Park. It’s such a pristine area. I have really enjoyed my day today. My 2 sons came along and we picked up a full bag in no time. It’s taught them something, that we shouldn’t litter but put litter in the rubbish bin. I would like to thank everyone from the Church of God for participating.” 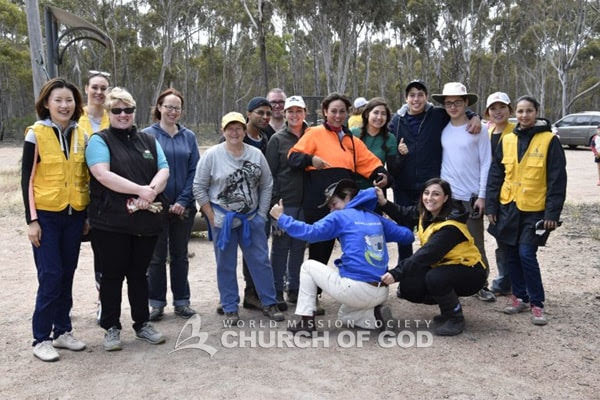 Most volunteers drove over 1.5 hours to join the event. The cleaning campaign result was outstanding, with 2 articles being printed in the local Geelong Advertiser newspaper, and with Parks Victoria giving a Certificate of Appreciation. Soon after the cleanup was held the news spread throughout social media with everyone applauding the great work of the Church God.