The love of Heavenly Mother covers the world through a series of street cleanups.

World Mission Society Church of God members resolved to cleanse along a length of 40,000 km, equivalent to the circumference of the earth. With the intention of spreading love and happiness, WMSCOG started the project on 19th November 2017.

On Sunday 26th November, more than 100 members, along with their families and friends, assembled at Wentworth Park in Ultimo, Sydney. The sun was shining powerfully, heating up the morning. Yet, the burning heart of the members became brighter and warmer than the summery sun. They gathered with one mind to glorify Christ Ahnsahnghong and New Jerusalem Heavenly Mother through the cleanup campaign. 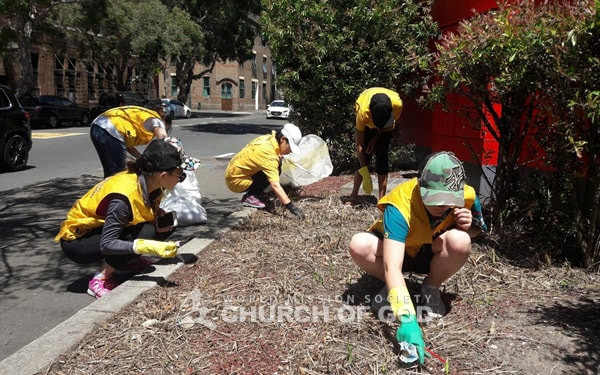 Arleen Montano, a volunteer, expressed her joy accordingly. She said, “The Worldwide Cleanup Campaign is an illustration of the true love of Heavenly Jerusalem Mother. Through this, we hope all people can feel Mother’s love that embraces the world.”

Notably, Marnie Watling said, “Being one in mind, let’s make every street into Mother’s street, beautiful and clean. The efforts of brothers and sisters in Sydney correspond brilliantly with members’ endeavours throughout the world. In fact, it is really great to be part of this movement!”

On 3 December 2017, the cleanup relay continued in Wollongong and Canberra. 25 volunteers made much effort to clean 3.5km along the Princes Highway in Wollongong, collecting rubbish filling one dozen 100 litre bags. Likewise, WMSCOG volunteers diligently cleaned up litter around the Australian National University, Canberra, covering approximately 2.8 km.

By June 2017, dedicated WMSCOG volunteers had conducted 4,650 cleanups worldwide. They will continue to make efforts to protect the environment and constantly share the love of God with seven billion people in the global village.