On Sunday, April 23, 2017, volunteers from the World Mission Society Church of God spent constructive time together, for the ‘Melbourne Inner City Cleanup’ campaign.

The volunteers, wearing bright yellow vests, were the talk of the town as they spread out across the city. For the purpose of making the city even more beautiful, they cleaned up litter from the ground. Melbournians as well as tourists, who witnessed the cleanup gave their approval, saying, “Good job,” “Thank you”.  They cheered for the dedicated volunteers whose faces were bright like angels.

Melbourne is a modern city known for its gorgeous surrounds. However, when examined closely, there are many places that are beyond the reach of council cleaning machines. Along the river were countless bottles. Similarly, thousands of cigarette butts littered the beautiful landscape near Flinders Street Station. There was also some hard rubbish in the streets including milk crates and a suitcase. 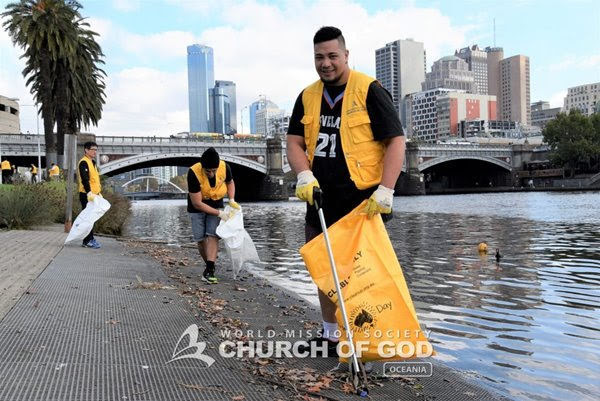 Bright smiles of more than 90 volunteers

The Melbourne Inner City Cleanup campaign was an overall success. The more than 90 volunteers picked up around 330 kg of waste. The group carefully divided the rubbish into 34 recycle bags and 32 landfill garbage bags provided by ‘Cleanup Australia Day’.

Raj Kapoor, a reporter from Sada Desh Punjabi newspaper in India, praised the passionate work of the Church of God in Melbourne. He said “I’m so happy to see the Church of God caring for this country as a family. I have just come here from India and I’m so happy to meet such a beautiful family”.  He was happy to hear that this cleanup spreads across 2700 regions, 175 different countries including India. “You are truly messengers of God,” he concluded.

Volunteers enjoyed the day. Among them, a high school student named Jenny. She said, “I feel really good because at school I never used to do cleanups. So I’m really glad to have this opportunity, as a youth, to do this Melbourne Inner City Cleanup with the Church of God. I enjoy helping the community and glorifying God the Father and God the Mother.”

The Governor of Victoria, Her Excellency the Honourable Linda Dessau AC, and Mr Anthony Howard QC sent a personal letter to the church volunteers. The letter thanked the volunteers for the important role they are playing in local community as well as encouraging them to keep up the good work.

In addition to that, Adam Bandt Federal MP also sent a letter to the group. He took the opportunity to recognise and thank participants for their contribution to preserve local green spaces in Melbourne.

Furthermore, Cr Cathy Oke, Chair of the Environment portfolio held a morning tea for some of the volunteers in the exquisite Queens room at Melbourne Town Hall to personally thank them.

The Church of God will hold their next cleanup at Mordialloc beach to spread the love of God the Mother. The Church of God has been doing cleanups every month as part of their ongoing effort for environmental sustainability.