In June 2017, a cleanup campaign took place at St Andrew Street Park, Brisbane as well as its surrounding streets. Volunteers from the World Mission Society Church of God, indeed, warmed up the cold morning with their bright smiles and helping hands. Like busy bees, they went bustling around, collecting litter that had accumulated in the park and along the streets. They gave the neighbourhood a make-over, and simultaneously relieved the council’s concern.

This campaign is the 3831 Worldwide Environmental Clean Up Campaign of the WMSCOG. Indeed, neighbours joined in after seeing volunteers’ heart-felt efforts. Brendon, a resident who lives next to the park said, “Thank you for allowing me to take part in this cleanup. It is a good work!”

With strength in unity, 46 volunteers gathered piles of rubbish, a microwave oven, a push bike, and green waste, within an hour. Giving glory to Christ Ahnsahnghong and Heavenly Jerusalem Mother, who have already come to this earth according to Bible prophecies, volunteers greatly rejoiced.

In particular, a member shared her wish at the event. She said, “I would like to be the salt and light of the world. This is an example of one of Christ Ahnsahnghong and Heavenly Mother’s teachings!”

Some members of the Brisbane City Council participated in the cleanup. They are Cristal Lau, and Paul Cusack, from the Litter Prevention Team, along with Cr Marx and her assistant Heidi. Furthermore, they supported the church with cleaning equipment and expressed their gratitude for the WMSCOG’s cleanup project.

“I like your cleanup as it allows children to get involved. It is a good education for them and for the residents as well,” said Paul Cusack of Brisbane Litter Prevention Team.

Cr Kim Marx also delivered her appreciation to the volunteers. “I want to say thank you to all of you for being here on this beautiful Sunday morning, picking up rubbish and making our streets beautiful. Thank you very much!” 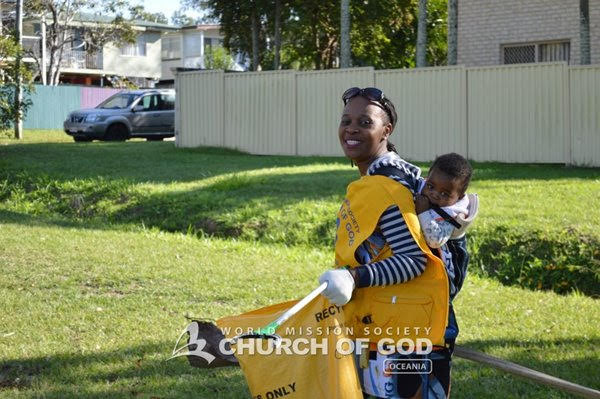