On September 15, 2016, the members of the World Mission Society Church of God carried out their 3,254th Worldwide Clean-up Campaign at Henderson Creek, in celebration of winning the Queen’s Award for Voluntary services.

The event was held during the Keep New Zealand Beautiful week, the local council were more than happy to support the event by providing rubbish bags, gloves, and gumboots for the volunteers. Many of the members brought along their family, friends and neighbours to participate in the cleaning event, spending time doing good work together.

The cleanup campaign brought forth a joyful atmosphere to the surrounding community of West Auckland. The major supermarkets, such as Countdown and Pak’nSave, were so pleased with the good work that they willingly sponsored the event with a delicious lunch for the cleaning team. The members are blessed to enjoy a meal after their hard cleaning work.

3 to 4 tonners of rubbissh was collected

Within only a few hours, waste, weighing around 3 to 4 tonnes, filled three trucks. Rubbish was collected from the side of the streets, underneath the bridges, and deep inside the bush areas around the Henderson creek. The local council appreciated the efforts of the volunteers in preventing such a large amount of rubbish from going into the ocean.

Overall, every participant enjoyed the cleanup. They did an excellent job, working in unity and putting so much effort into making a better environment. The local residents were amazed at the cheerful mind and a positive attitude that even the cold and wet weather could not dampen. All people were moved by their devotional work. Their great work is a rainbow at Henderson Creek. 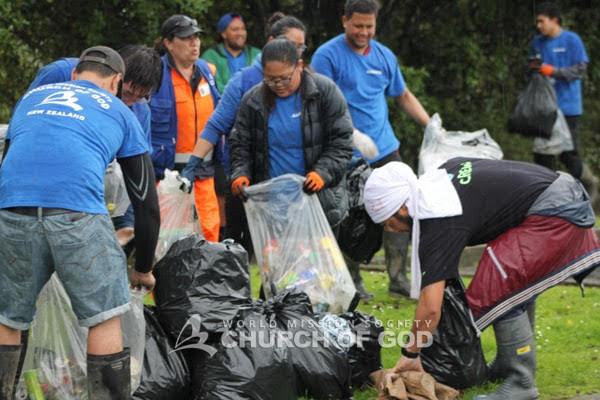 This volunteer work is inspired by Heavenly Father and Heavenly Mother

Through this cleaning event, the members of the World Mission Society Church of God received a great spiritual realisation from giving back to the community, collecting rubbish, cleaning the environment. Members could realise how hard it must be for Heavenly Father and Heavenly Mother, who are sacrificing themselves constantly in order to purify the children from sin.

The volunteer work is an act to share love through which God promised great spiritual blessings. Church of God members continually gave thanks and acknowledged Heavenly Father and Mother, who have inspired them to practice the teachings of God and serve others.