WMSCOG members who reside locally, united their mind. They gratefully participated in the activity, giving up their rest on Sunday morning. They spent a great time, along with their families, making their community’s environment cleaner and more beautiful. 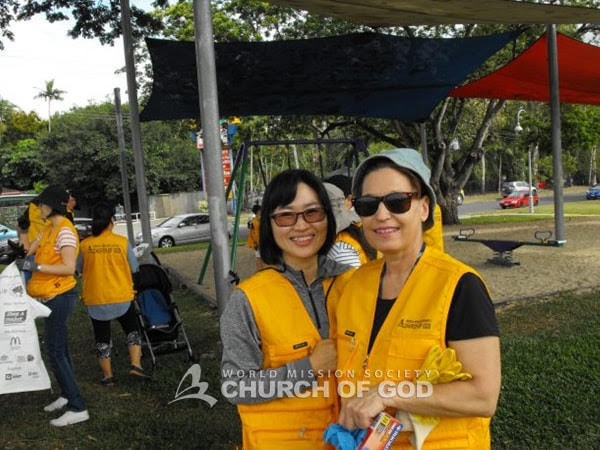 Max O’Halloran, a councillor of Cairns, also participated in the voluntary work. He is in charge of Cairns Division 7, including Edge Hill, Whitfield, and parts of Manoora, Manunda, and Brinsmead. After participating, not only did the Councilor Max give some encouragement, but also willingly introduced the good deeds of the Church of God to Bob Manning the Mayor of Cairns. The World Mission Society Church of God in Cairns received a Cairns City Mayor’s certificate of appreciation on the 25th of October 2017.

Fourteen happy volunteers participated in the cleanup campaign. They donned yellow vests, as bright as their smiles. They walked along the roadside, picking up litter and dead leaves. One of the passersby beeped their car horn with a big smile, to express encouragement and gratitude to the volunteers.

The councillor, Max, was impressed during the cleanup. He encouraged the volunteers, saying, “The amount of rubbish that you found is surprising. All of the work that the Church of God does is very good.”

Hester, working as an airline supplier at Cairns Airport, was also willing to spend productive time doing such a worthwhile activity. She diligently picked up rubbish the whole time. Afterwards, she kept saying “Thank you!!” being moved by the love of brothers and sisters.

“Let your light shine before others, that they may see your good deeds and glorify your Father in heaven.”

It was the second time that WMSCOG in Cairns got involved in the Great Northern Cleanup Campaign. However, this is just the beginning. Following the teachings of the Bible, WMSCOG in Cairns plans to carry out this work regularly.

They hope to make a continuous contribution to society through their efforts to preserve and sustain a beautiful environment. This is so that people can come to the light of Heavenly Mother, and see the glory of New Jerusalem. On the 17 December 2017, the good deeds were published in Cairns City Council’s magazine as below.